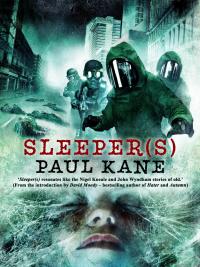 
…and when Doctor Andrew Strauss and the army move in to investigate, the sleepers stand up to defend a single woman as a cohesive group, and mind. As Strauss' covert past and foretold future clash, the twisted fairytale truth behind this event will leave you breathless.

From the imagination of the award-winning and bestselling author of Who's Been…? and RED (optioned for film and turned into an award-winning feature script), this chilling reworking of another well-loved fairy tale reads like a heady mix of The Andromeda Strain, Inception, Outbreak, and Quartermass, and is a tale that's bound to delight genre fans the world over.

The sleepy English locality of Middletown is about to get even sleepier, as a strange malady starts to affect the population. It spreads quickly, causing the authorities to quarantine this small city, and seek out the only person who might be able to help: Doctor Andrew Strauss. However, Strauss has a secret, one that has linked him to this place all his life, one that has linked him to a particular person there, though he doesn't yet know who. But he's not the only one hiding things - and as he ventures into Middletown to collect samples with an army escort, a mixture of UK and US troops, cracks soon begin to appear in the operation. Especially when his team comes up against the most terrifying threat humankind has ever known.

Interview with the author:

So what makes this Sci-fi Adventure so special?

Paul Kane: One Hollywood producer also called this one 'The Andromeda Strain meets Inception', which I think is a fairly accurate description.

Tell us more about your lead character, Dr Andrew Strauss.

Paul Kane: Strauss is an arrogant, womanizing know-it-all… But he's the only one with the knowledge to save the people of Middletown - who have all fallen asleep, the victims of some unknown virus. The military have called on him to venture in and find out what's going on, accompanied by a joint US/UK squad of soldiers. Of course, Strauss has his own reasons for going on this mission, which you'll discover if you read the book. Andrew Straus is single-minded, plus he's also self-aware and a genre fan…so much so that he recognises he's a kind of Quatermass figure in this story.

Why should readers give twisted fairy tale novella a try?

Paul Kane: If you like a heady blend of horror, science fiction, dark fantasy and fairy-tales - as this book is also a modern retelling of Sleeping Beauty - we've got you covered. It moves at quite a pace, hitting the ground running and never pausing until you get to the end, just what you might expect of a thriller of this kind. It's got some great characters, from the obnoxious British soldier Timms to Suzanne - my version of Sleeping Beauty herself - the lynchpin of the entire book. There should be enough in here to satisfy most readers of genre fiction.

This was a great old school horror story that was both creepy and fun. After the people in Middletown fall asleep due to some unknown virus (or whatever?!), the military bring in expert Dr. Andrew Strauss, in hopes of finding a cure for this outbreak. When Dr. Strauss, his assistant and a crew of soldiers enter the quarantined town, they find all inhabitants asleep, covered in some spiderweb-like residue which seems to ooze off their bodies like sweat. However, when Strauss takes samples and...