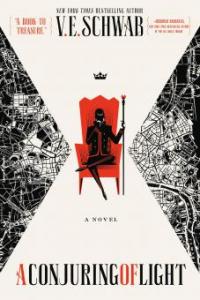 A Conjuring of Light

As darkness sweeps the Maresh Empire, the once precarious balance of power among the four Londons has reached its breaking point.

In the wake of tragedy, Kell-once assumed to be the last surviving Antari-begins to waver under the pressure of competing loyalties. Lila Bard, once a commonplace-but never common-thief, has survived and flourished through a series of magical trials. But now she must learn to control the magic, before it bleeds her dry.

An ancient enemy returns to claim a city while a fallen hero tries to save a kingdom in decay. Meanwhile, the disgraced Captain Alucard Emery of the Night Spire collects his crew, attempting a race against time to acquire the impossible.

Shades of Magic series1. A Darker Shade of Magic2. A Gathering of Shadows3. A Conjuring of Light

At the Publisher's request, this title is being sold without Digital Rights Management Software (DRM) applied.